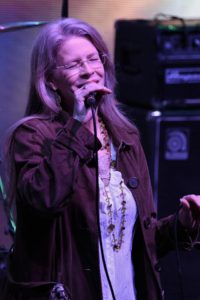 Carrie joined Paper Jam in 2011.  Her love of music was first influenced by her father. He had a dance band in the 1970s. Her earliest memories were going to bed at night with the bedroom door rattling while her dad’s band practiced in the living room. Later on, his music was over her bedroom and he’d compose music after supper until late into the night.

Terry joined Paper Jam in 2018. He moved to Northwest Arkansas in 1960 with his parents and claims Arkansas as his home state. From the mid 60’s to the early 70’s, he played in a number of bands in the Fayetteville area and performed with a number of youth groups in local churches. While in high school, he played in a combo that backed up the select female singing group that performed all over the area and traveled to Washington DC. His band playing came to an end when he decided to take a job at in Bella Vista in 72 and moved to Bentonville. Over the years, he continued to play as a substitute in area bands and playing in local churches. In the late 90’s, he started playing every Sunday in contemporary worship services and continues to do so. He started looking for a band to play in before retiring from Walmart in 2014 and is so happy to be able to play with Paper Jam.

Joe started playing guitar at age of 12. His childhood best friend got him started and they had neighborhood “concerts” on his dad’s carport… It was a big deal (for kids) to play for neighbors who would bring lawn chairs to the “side yard”.  He went on to playing in churches as many relatives were also musicians.

Early influences were Country Music icons Waylon Jennings, Merle Haggard, Alabama, Charlie Daniels so many more.  As time went on Joe turned to the Southern Rock genre and Classic Rock radio was king. Rolling Stones, ZZ Top, Skynyrd the list goes on and on. After a few bands for fun…then came marriage and families.

Fast forward 35 years and here we are. Joe has played (in jam sessions) and sat in with some of the most talented people in the region, including some musicians that have been or are currently with touring national acts and studio musicians with record label credits.

Joe loves playing guitar and performing in a band atmosphere. He believes that God blesses us in different ways and is glad to be a part of music and a part of the professional musicians that make up Party Line Band. 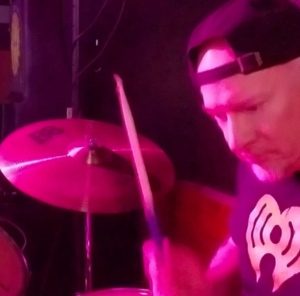 A native of Northwest Arkansas, Rocky has been playing drums in the area from the age of 14. After learning to play gospel music in church, he has played country, folk, rock, blues, jazz, and hip-hop. A desire to study more styles and rhythms led to participating in Silkroad’s annual Global Musicians Workshop at DePauw University in 2017 with musicians from over 20 countries. He enjoys playing anything from a full traditional setup to recently focusing on the cajon, a wooden box which is sat on and played with the hands. Rocky continues to play in local churches and enjoys laying down a deep groove on classic rock or rhythm & blues tunes. 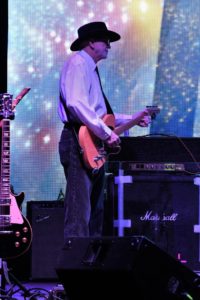 Growing up in Cleveland, Ohio enabled him to have access to major groups, concerts, musicians and musical opportunities during the birth of Rock and Roll.

Groups like the Beatles, Beach Boys, Eagles, Kinks, The Choir, The James Gang, music from the Summer Of Love, Woodstock and so many more frequented the Cleveland area and helped form the musical background he now possesses. He started playing in a band – like everyone else – in the mid 60’s but hung it up for other things until he had the opportunity to join Paperjam.

Party Line Band
Is a fun loving band good ol’ rock n roll band influenced by those great songs and artists from the 60’s and 70’s as well as the Southern Rock sound.

The hard working 5 piece rock band was established in 2009 in the Northwest Arkansas city of Rogers.
The band is comprised of Carrie (Vocals and percussion) Terry (bass and vocals), Rocky (Drums), Joe (Lead Guitar and vocals and Tom (Rhythm guitar and keys).

Together they use their passion for music to create a classic sound featuring the songs that many grew up with danced to or even listened to in the back seat of their parents and grandparents.

In the Spring of 2009, the original members of the band laid the foundation of what was to become Party Line. Carrie joined the band in 2012, Terry and Rocky joined in 2018 and Joe in 2019 to finalize the current lineup.

Each new member added something special to the mix needed to become the band we were working to be and allowed us to move to the next level of live music in the very competitive music market of Northwest Arkansas!

Working hard on new songs for gigs, each put in hours of practice in order to bring those skills to rehearsals each week to blend them together as one.
With influences from the Beatles, Rolling stones, Marshall Tucker, Lynyrd Skynyrd, Tom Petty, The Who, Joan Jett, Fleetwood Mac, and Creedence Clearwater Revival, Party Line plays shows the bring back memories for fans of all ages.

Party Line plays an interactive show, with audience participation, stories behind the music and other fun aspects.

Party Line’s sound covers hard driving rock sounds Like “I Love Rock and Roll” to slow mellow bluesy tunes like “Tennessee Whiskey”.
When you come to a Party Line show, you become part of the overall experience!